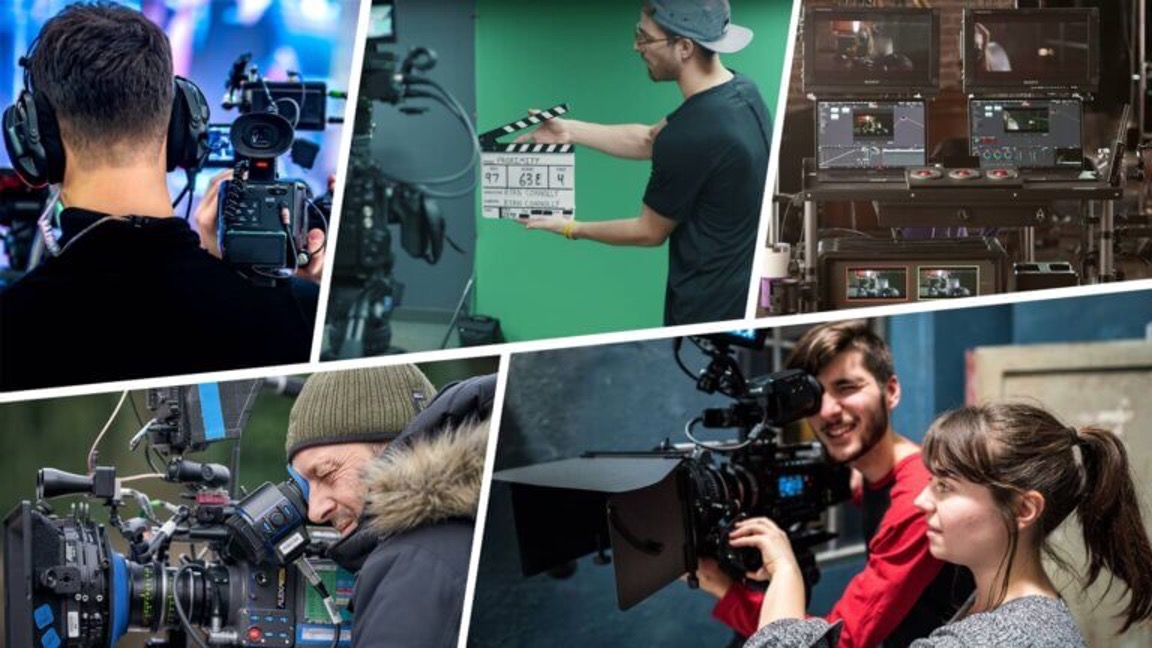 The director of photography, also referred to as cinematographer, is the head honcho of the crew throughout production. They work closely with the director to determine the style and visual look of the film. The DP oversees multiple departments including grip, electric (gaffer), and camera.

In relevance to the camera department, the DP ultimately determines what camera to shoot on, camera lenses, lighting setups and designs, composition, and camera movement of every shot.

One of the best cinematographers in the business right now is Roger Deakins. Take a look at our video analysis to better understand how Deakins approaches a film as the director of photography.

The camera operator is the person who literally operates the camera. They are the person looking through the viewfinder and hitting the record button.

While the camera operator is the camera crew role that physically holds and maneuvers the camera, they often need the help of the first assistant camera to pull focus.

The first assistant camera, also referred to as 1st AC, has multiple responsibilities. During a take, the 1st AC is typically responsible for pulling focus — adjusting the camera’s focus during a take. Because of this, they are also know as the focus puller.

This job is incredibly important and 1st ACs are often evaluated on their accuracy and consistency with pulling focus. Here is a video by the Slanted Lens that talks about the responsibilities of a 1st AC and some tips on how to be a good one on set.

As mentioned in the video, focus is the primary role of the 1st AC, but not the only. The first assistant camera is also responsible for retrieving lenses for lens changes, building the camera at the start of the day, and breaking down and properly storing the camera at the end of a day.

Right under the first assistant camera is, you guessed it, the second assistant camera. The 2nd AC is responsible for the slate for every take of a shoot. Slates can seem complicated as they have a bunch of numbers and letters that need to be updated shot to shot.

Here are a few tips from Film Riot regarding how a 2nd AC should run a slate as well as a few other 2nd AC responsibilities.

The 2nd AC is crucial in keeping the camera department organized and efficient. They help replace and recharge camera batteries, load and unload film stock or memory cards, and they update film logs with accurate information for each scene, set-up and shot.

A digital imaging technician, or DIT, is responsible firstc for on-set color correction of footage. This video breaks down how and why a DIT would color correct footage on set and why it’s one of their primary responsibilities.

Secondly, as mentioned in the video, the DIT is responsible for managing and organizing the media given to them on memory cards. Many high end cameras such as Alexas and Reds, require a lot of memory cards because of how much information they write.

The DIT must dump and organize the information on these cards immediately after they are filled so they remain organized for the editor. This is a crucial responsibility to ensure that no footage gets lost or accidentally overwritten.

Steadicams can often be incredibly heavy, so these operators must be able to physically operate the system for long shoot days. Here is experienced Steadicam operator Jess Lopez speaking on the responsibilities of the position and what it’s like to be one.

At the very bottom of the camera department totem pole is the camera production assistant. The camera PA is similar to what an intern is for any other business. They are on set to learn and should be willing to do whatever is asked of them to help the production.

What Does a Cinematographer Do?

Many aspiring filmmakers want to be the chief of the camera department — the director of photography or cinematographer. Before you jump on set as a cinematographer, learn about their responsibilities and what they aim to achieve when taking on a new film project.

What is Chromatic Aberration — Types and Examples Explained